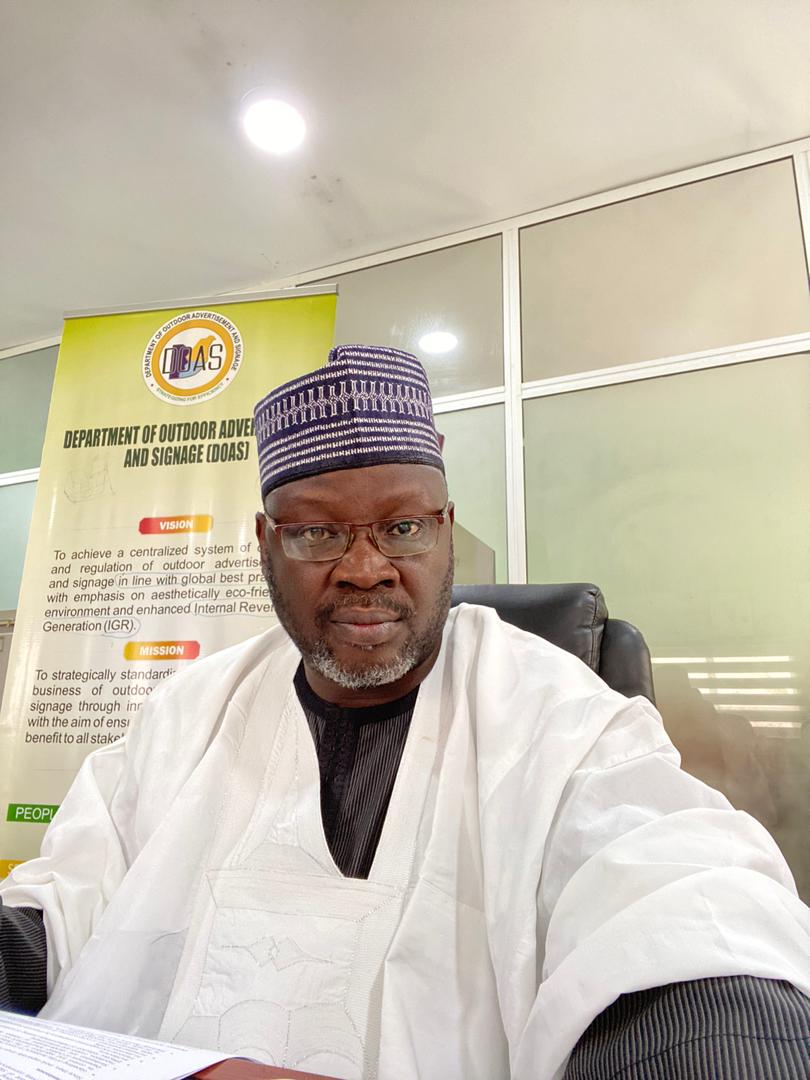 As players in the Out-of-Home (OOH) advertising sector battle for improved business relationship and business profitability, the Executive Director and Head of Department of Outdoor Advertisement Signage (DOAS) in the Federal Capital Territory, Dr. Babagana Adams, has decried the activities of quacks and unregistered practitioners in the Federal Capital development area.

Dropping the hint early in the week during the 35th yearly meeting of the Outdoor Advertising Association of Nigeria (OAAN), Dr. Adams said OAAN should spare no efforts in tackling the issue of quacks which operations continued to give negative impressions about the industry.

He stated that the Department of Advertisement Signage under his leadership will not relent in ensuring that FCT is a no-go area for the operations of quacks and unregistered practitioners.

Disclosing that his agency and the outdoor advertising body has achieved more collaboration since he assumed the leadership at DOAS, Dr. Adams said he has in furtherance to ensuring better relationship proposed to FCT Minister, Alhaji Mohammed Musa Bello, the need to grant rent waiver for the first quarter of the year to all billboard operators in FCT due to the lack of business resulting from Covid-19 pandemic.

Specifically, Dr. Adams said; “DOAS has made a proposal to the FCT Minister for payment waivers on all billboards in Abuja during the Covid-19 pandemic lockdown”, adding that “no charges would be collected on billboards in the FCT during Covid-19 lockdown as there was virtually no business on all these structures”.

He also stated that in view of this, the agency under his watch would give discount on vacant sites in the metropolis advising that OAAN members should ensure that billboard infrastructure in the Federal Capital Territory is protected.

Reminding the practitioners about the responsibility of DOAS, Dr. Adams said the agency was set up to ensure billboard environment sanity, noting that he will not relent in that onerous responsibility as the city would be made uncomfortable for quacks to operate

According to him, “DOAS tasks, are therefore to promote and enforce high ethical standards in outdoor advertisement and signage system” stating that the department was mandated to investigate complaints, identify and resolve problems with a view to ensuring that the system operates in the public interest while acting as a channel for communication with those who have interest in advertising standards.

He stated that, “as the country battles the pandemic, the mission of DOAS could not ring truer as espoused in its guiding principles which stipulates that all outdoor advertisements and signage take into consideration the protection of the environment as well as social amenities, and the protection of public safety and the aesthetic appearance of the FCT Abuja”.

The director, who saluted the existing collaboration between OAAN and his agency listed, some of the milestones recorded since he assumed duty to include but not limited to:

He also disclosed that the department under him is currently spear-heading a campaign and commemorative project to mark Nigeria’s 60th Independence anniversary celebrations, pleading that OAAN and its members should come to DOAS aid by sponsorship and financing of the project in view of their new partnership.

While advising other regulatory agencies in the sector to shelve any idea of tariff increment, he stated that there is need  to enforce standards and deliver on value for investment spend for various stakeholders, especially small business owners who need all the patronage possible at this period of global Covid-19 pandemic.

He reiterated his agency’s commitment to remain the strategic partner and ally of OAAN in upholding best practices in out-of-home advertising in Nigeria.